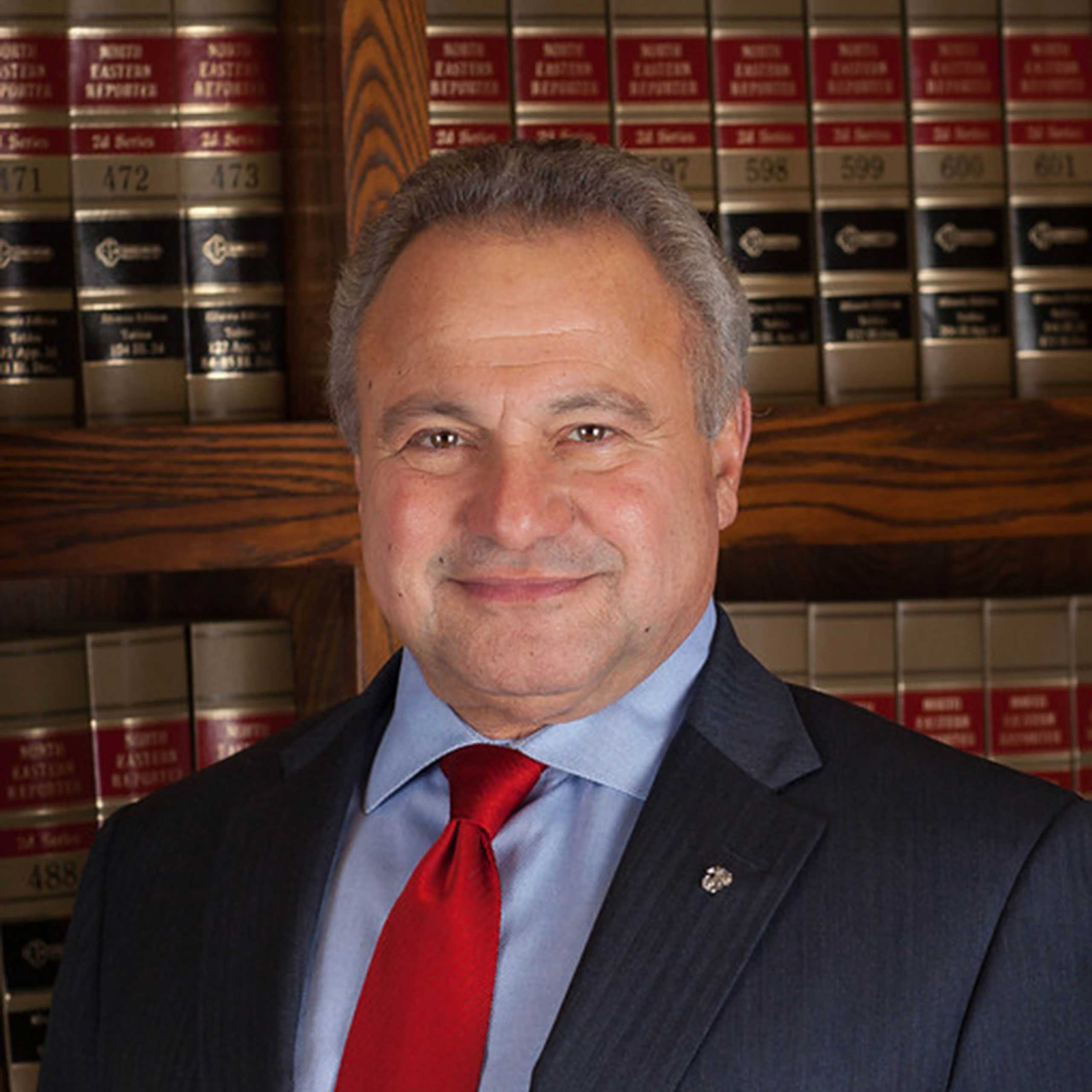 Sam L. Amirante, a retired Judge of the Circuit Court of Cook County has returned to private practice, where he concentrates in the areas of criminal and civil litigation. While a Judge, Sam Amirante was assigned to the County’s Third District Courthouse in Rolling Meadows for 13 years and 3 years in the City of Chicago, Judge Amirante carried out his duties with competence, integrity, dedication and compassion. A Chicago columnist, who dubbed Judge Amirante the Hugging Judge, noted that he occasionally directed youngsters in court to hug their parents after resolving matters which have caused an emotional break between them, usually evoking a round of applause from his courtroom. After his appointment to the bench in December, 1988, Judge Amirante presided over hundreds of jury and non-jury trials involving Felonies, Misdemeanors, Traffic, Domestic and Civil matters. He earned approval and praise from sundry citizens, government officials and court watchers.
Upon graduation from Loyola University of Chicago with a Bachelor of Science Degree in 1970 Sam enlisted in the United States Marine Corps. From 1970 to 1976 Sam honorably served in the United States Marine Corps on both active and reserve duty attaining the rank of Sergeant and Platoon Leader. While in boot camp he became the17th Marine in the long history of the Corps to receive a perfect 500 points on the tough Marine Corps physical fitness test. Sam is currently a member of the American Legion, Chicago Police Marine Corps League, Italian American War Veterans and various other veteran groups.
While on reserve duty, Sam earned his Juris Doctor Degree (JD) from Loyola University School of Law in 1974, graduating in the upper third of his class and was a member of the Phi Alpha Delta Law Fraternity. While attending school, he worked part-time as a policeman for the Village of Norridge. Following his admission to the Illinois Bar, he became an Assistant Public Defender participating as lead counsel in hundreds of felony and misdemeanor bench and jury trials. Sam eventually became the supervising attorney for all of Northwest Suburban Cook County. In 1978,Sam entered the private practice of law where he tried cases throughout the State of Illinois and other States and served for a Prosecutor for the Village of Norridge. That same year, together with Attorney Robert M. Motta, provided legal counsel for serial killer John Wayne Gacy. At the conclusion of the trial, the trial judge commended Amirante and Motta for the excellent legal defense they had provided during the 15-week long trial. Prior to Judge Amirante’s appointment to the bench in 1988, he was a partner in the law firm of Amirante & Etchingham with offices in Park Ridge. In 1987, upon completion of the United States v. Jack Farmer et.al. trial in the United States Federal District Court for the Northern District of Illinois the Court Buffs of Chicago reported in their December 10, 1987 Courtwatchers Newsletter: “Having observed the likes of BAILEY, BUGLIOSI, AND SPENCE PERFORM IN CHICAGO COURTROOMS, we can say the amicable AMIRANTE ranks with them.”Sam is licensed to practice law in the State of Illinois, the Federal and U.S. Supreme courts. He has appeared pro hoc vice on matters in Wisconsin, California, Michigan, Washington, Indiana, and Washington, D.C.
He has served as a representative of the Illinois State Bar Association; Northwest Suburban Bar Association (past president); Italian American Bar Association; Illinois Judges Association; the Justinian Society of Lawyers; the Board of Special Olympics; Board Member of Our Lady of Pompeii Catholic Church in Chicago; Legal Technology Advisory Board at Harper College; the Arts and Science Alumni Association of Loyola University; National Italian American Sports Hall of Fame; the Italian American Political Coalition and Joint Civic Committee of Italian Americans; Director and Legal Counsel for the Italian American Police Association; Director for the Little City Board; and as author of the Missing Child Act of 1984, commonly referred to as I-SEARCH; and authored the Loyola Law Review article George Orwell’s 1984 Revisited, Police Abuse of Computers in the 20th Century; and has appeared on numerous television and radio programs as well as speaking engagements.